The asset management firm Grayscale has become a benchmark for institutional interest in cryptocurrencies. In 2020, Grayscale was Bitcoin’s most aggressive buyer, celebrating a year-end with $20 billion in assets under management for the first time.

However, not all Grayscale products seem to have the same boom as those based on Bitcoin and Ethereum. As reported by CNF based on data from the exchange Bybt, Grayscale had allegedly reduced its position in XRP and XLM after the introduction of a Securities and Exchange Commission (SEC) lawsuit against Ripple Labs.

The lawsuit is considered the first step in a series of measures that could extend to other tokens and entities in the crypto space. Therefore, it was speculated that Grayscale would have dump at least half of its funds in XRP and Stellar Lumens (XLM).

Data from CryptoWhale shows the opposite. According to the monitor, the institution has made its biggest XRP purchase in its history by buying 12.48 million XRPs on New Year’s Eve. The monitor claims that Grayscale took advantage of the drop in XRP’s price caused by a “massive selloff” to make its purchase.

Reason for Grayscale’s purchase of XRP

Bybt updated its data to reflect the referred purchase, as shown in the image below. Grayscale has 38.88 million XRP purchased at an average price of $0.24 to bring its total XRP holdings to an estimate of $9.16 million, at the time of publication. 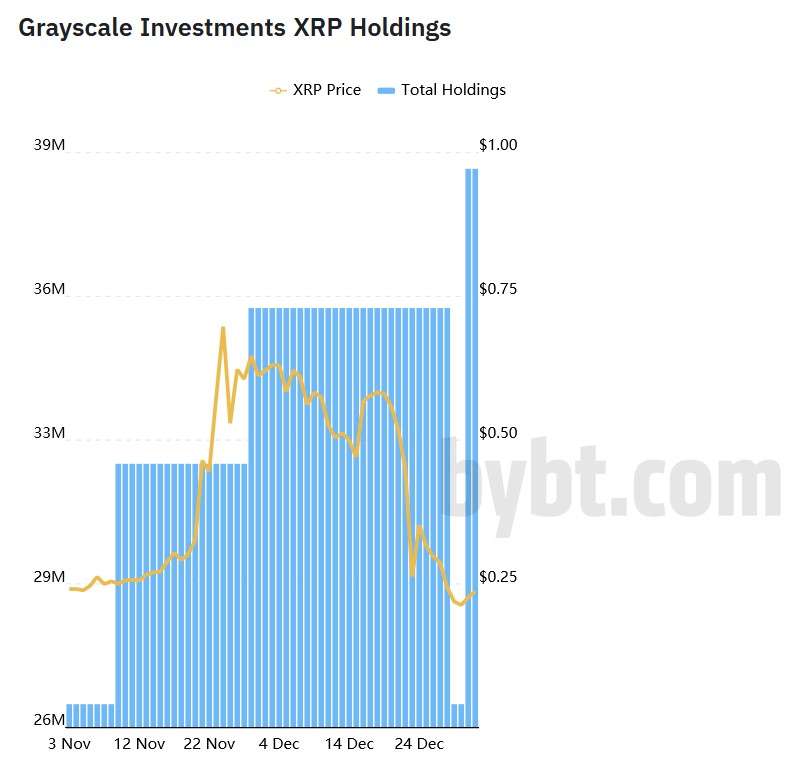 In the crypto community, some users have expressed that Bybt’s information is contradictory. The SEC’s lawsuit considers XRP a security and therefore any entity offering a product based on the digital asset could be subject to sanctions. Therefore, it seems a contradiction to accumulate more XRP.

However, Belcher, Smolen & Van Loo LLP partner Gabriel Shapiro explained that despite the severity of the SEC’s lawsuit against Ripple Labs, the final outcome of the lawsuit could be benevolent. Ripple could be forced to become an SEC reporting company and XRP could be re-enabled to trade on Coinbase and other trading platforms.

A court decision is still far away, Grayscale could be accumulating XRP in the event that Ripple gets a favorable outcome. By buying XRP at low prices, the institution could take advantage if the XRP’s price returns to levels it had about a month ago at $0,46.

A Grayscale representative also confirmed to Cointelegraph that the firm’s investment products do not operate under a redemption program. Therefore, total holdings for a product only change as a result of a private placement, changes in the price of the underlying asset, or accrued management fee. Grayscale’s representative added: