It’s been a dark week for Terra’s ecosystem. LUNA has been on a freefall as the crypto market’s trust in the project, and its relation to the not-too-stable UST stablecoin has been shaken. In the past week, LUNA has lost 98 percent of its value to trade below $2, but founder Do Kwon has a master plan that he believes can save the project. But it could get a lot worse before it gets better. 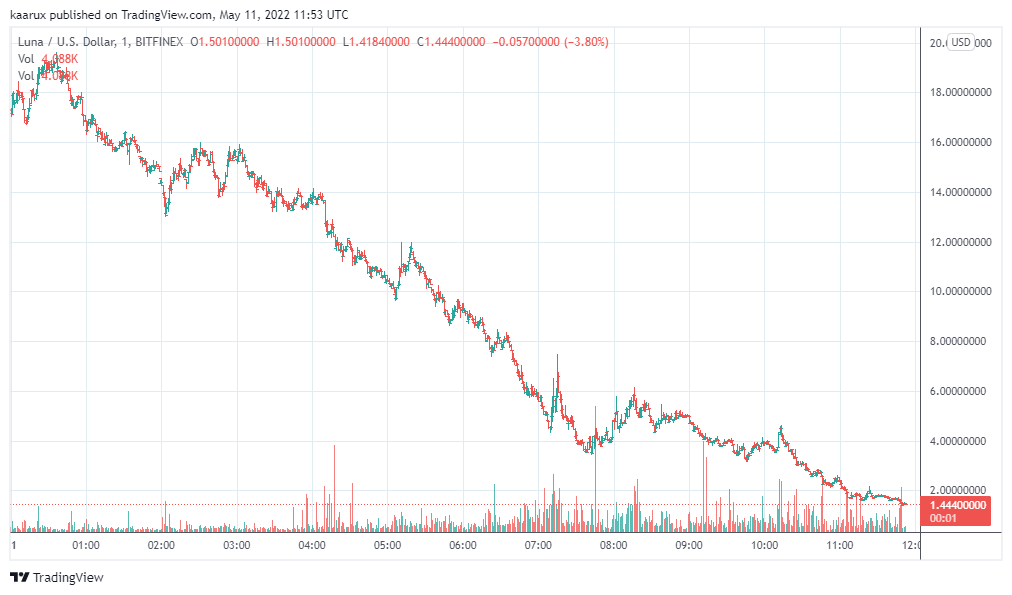 (LUNA’s price performance in the past 24 hours).

Do Kwon has been teasing on Twitter that he has a plan to save LUNA which, naturally, led to a lot of speculation from crypto fans. Some claimed that a number of the big money firms were coming together to bail UST out, mentioning Sam Bankman-Fried’s Alameda Research as one of the firms interested alongside Jump Capital.

There is a rumor spreading about Jump, Alameda, etc. providing another $2B to “bail out” UST. Whether this rumor is true or not, it makes perfect sense for them to spread. The biggest question here is, even if they can get it to $1 by some miracle, the trust is irreversibly gone

He started off by sympathizing with the Terra community, claiming, “I understand the last 72 hours have been extremely tough on all of you – know that I am resolved to work with every one of you to weather this crisis, and we will build our way out of this.”

Kwon further stated that his company had put a price stabilization mechanism in place to absorb UST supply, but “the cost of absorbing so much stablecoins at the same time has stretched out the on-chain swap spread to 40%, and Luna price has diminished dramatically absorbing the arbs.”

Arbs refer to arbitrage which is the trading strategy in which traders buy or sell LUNA for UST to maintain the peg while making a profit in the process.

The Terraform Labs founder knows that the only way forward is to absorb the stablecoin supply that wants to exit before starting the journey of re-pegging. In this regard, he endorsed Community Proposal 1164 which proposes quadrupling the minting capacity of LUNA from $293 million to $1.2 billion.

What this means is that Kwon will mint four times as many LUNA tokens and then sell them on the open market to try and stabilize the value of the UST stablecoin. Currently, the LUNA price is getting battered and once the proposal is acted upon, the supply will hike almost at once. Naturally, a rise in supply could be catastrophic for the crypto, meaning that it could get much worse for LUNA before it gets better.

Kwon further revealed that there are plans to ensure that the entire UST supply is collateralized, meaning that there will be funds in reserve for every UST, which is the model that Tether and USD Coin use and which is a step back from the algorithmic nature of UST.

12/ As we begin to rebuild UST, we will adjust its mechanism to be collateralized.

Terra’s focus has always oriented itself around a long-term time horizon, and another setback this May, similar to last year, will not deter the LUNAtics. Short-term stumbles do not define what you can accomplish. It’s how you respond that matters.

Der Beitrag Do Kwon unveils his master plan to save UST as LUNA crashes 98% – Here’s why it could get worse erschien zuerst auf Crypto News Flash.