Delta is designed to bridge the gap between low liquidity options market prices and volatility. Through the use of liquidity mechanisms, Delta has been deployed as a scalable options layer for investors looking for opportunities in the derivatives market.

Delta aims to ensure liquidity on option platforms to reduce volatility by increasing market certainty. As a result, Delta users will be able to trade at reduced premiums on option prices. To achieve this, the DeFi protocol will leverage a new mechanism called Open Vested Liquidity (OVL). In a statement shared with CNF, the team behind Delta states:

(…) using liquidity which is based on a vesting schedule increases market certainty and opens up the possibility to secure a unique environment which promotes healthy options prices for a variety of different tokenized assets.

The vesting mechanism built into the protocol will be based on a “block” schedule, but will be triggered with each transfer. Once the above occurs, 10% of the total balance of the transfer is sent to the user and 90% remains “locked” for the purpose of being released linearly over a 14-day period.

A token transfer cancels the vesting schedule and the remaining vested tokens get distributed to the Vault as staking rewards.

Therefore, the protocol will have 2 types of liquidity, Open Vested Liquidity and Permanently Locked Liquidity. The latter will be composed of tokens called rLP which will have a limited supply enable with a liquidity rebasing mechanism to “consistently raise the minting price of rLP tokens while the liquidity pool size remains unaffected. Before the first Liquidity Rebasing, users have the opportunity to stake their capital during a Limited Staking Window to redeem rLP tokens at face value.”

Users will be able to use the Deep Farming Vault feature which will operate with an incentive mechanism. This mechanism will have the secondary function of “assisting” the main system to increase liquidity if demand is exceeded on the Delta protocol.

Delta’s native Delta token will have a total supply of 45 million, without the possibility of additional tokens being minted. 46% of the referenced total will go to the Liquidity Reserve Vault, 23% to Delta’s founding team, 17% for co-op and growth strategy, 10% to a research and development fund and 4% to liquidity for the Bonding Curve Liquidity. 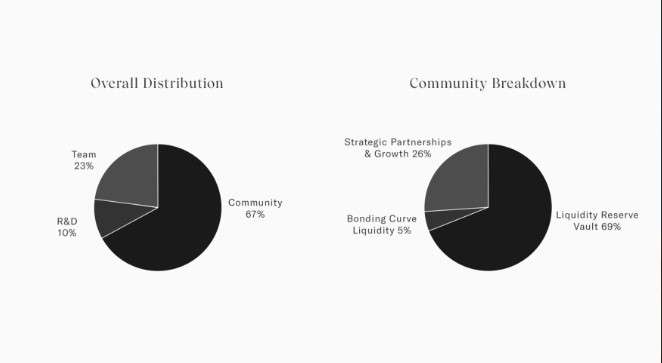 In parallel, the protocol will offer integration with the ecosystem that operates the non-inflationary cryptocurrency CORE. In that way, DELTA will serve as a “building block” to better integrate financial derivatives (futures and options) to the decentralized exchange called coreDEX. The release states the following:

Parts of the profits generated from Vault strategies, Options, Open Vested Liquidity and future features will be distributed to the CORE ecosystem and used to auto market buy the CORE token. CORE LP & CORE token holders may stake their assets in the upcoming coreDEX Migration Contract to participate in early fee sharing during coreDEX alpha and beta.