This week had the entire cryptocurrency market painted in red as Bitcoin withdrew to a low of $17,650 before recovering to where it currently trades at. All of the altcoins followed suit, and as a result, they’ve charted substantial decreases over the course of the past seven days, as seen in the graph below. 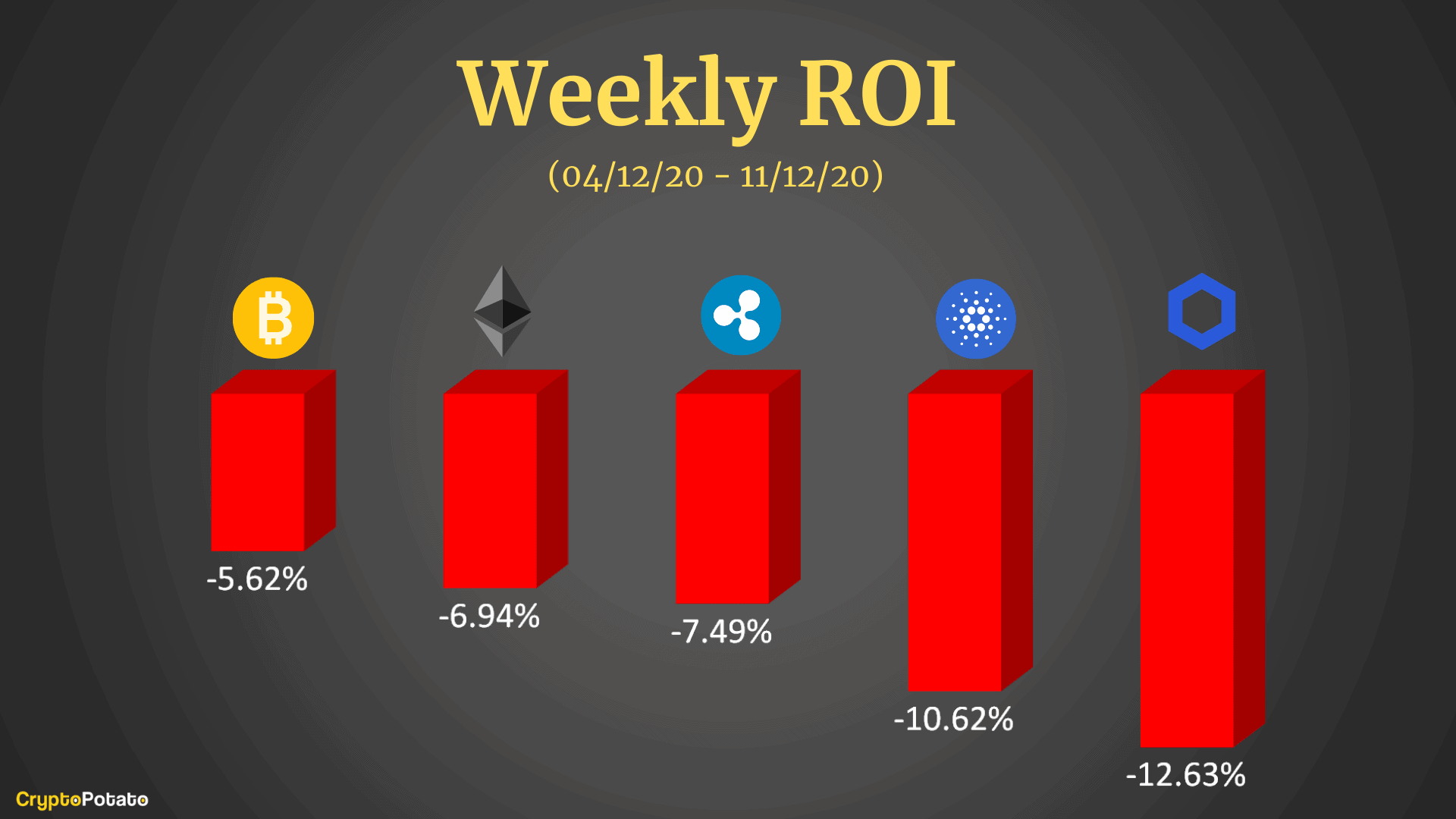 Bitcoin lost roughly 5.6% over the past 7 days now. Following the latest drops, the leading cryptocurrency is now floating around $18,000.

However, its long-term bullish trajectory is still looking much valid on the current daily chart. However, considering a mid-term bearish movement, Bitcoin would need to drop off the ascending trend line forming since March. A short-term reversal would confirm if the weekly $16,235 support level fails to hold. The next key supports lie at $15,100 and $14,000 levels.

If Bitcoin manages to bounce back, it would need to retake the $18,000 and $19,000 psychological resistance levels. The next major resistance is $20,000 before it can create a new ATH. But unfortunately, the bears appear to be in control for now in the short-term.

Ethereum saw a steep 7% loss over the past week. Although, it managed to hold well above $500 for a while now after printing a two-year high in November. The $640 rejection around the ascending channel’s resistance suggested a potential sell, which had played out to where it’s currently trading at $545.

Against Bitcoin, Ethereum is looking bullish on the daily chart as it continued to rely on the yearly support. But from a technical perspective, the trend appears bearish on the hourly. The 0.03 BTC monthly support has been suppressing bearish actions for a while now.

After losing almost 7.5% in the past week, Ripple is now changing hands at around $0.55. While the price remained trapped in a symmetrical triangle for over two weeks, XRP appears to be getting ready for a big price movement. The next direction is still indecisive.

Against Bitcoin, XRP continued to found support above the 2800 SAT level since it got broken last month. Despite the latest bearish actions, the market structure still appears bullish on the daily chart. However, this may fade away if the price slumps back below the long-term descending line.

Cardano continues to remain bearish on a short-term perspective after losing 10% in a week. The price is now eyeing the $0.13 level following a daily 1% drop. At the moment, the sellers are showing a lot of commitment to the market.

Notwithstanding, the long-term bullish trajectory remains valid. Strong bearish actions may occur if ADA drops below the ascending trend line. But for now, the support levels to watch are $0.1296 (Wednesday low) and $0.115. If a rebound occurs, the $0.15, $0.17, and $0.19 resistance levels might resurface again.

After breaking out from a crucial resistance line forming from weeks back, Cardano’s price touched 994 SAT and saw a decline to where it’s now trading at 778 SAT. However, it is yet to find a key level for a rebound following the ongoing correction.

Should the daily MACD indicator crossover, the 733 SAT and 613 SAT supports levels are likely to come into play. However, if the technical RSI provides solid support, ADA may recover and start a fresh increase to 994 SAT.

As the crypto market continues its correction, Chainlink lost about 12% of its value in the last 7 days. The price is testing a three-month support line after rejecting RSI 70 ($17) since November 24. Nonetheless, there’s still hope for the bulls if this support line provides a rebound.

Following past months’ decline, Chainlink is now trading near the 65000 SAT level with 2.5% decreases over the past 24-hours. At the same time, the 7th largest coin is almost testing its 6-month low at 60645 SAT level. As suggested by the daily technical indicators – RSI and MACD – the bears are still in charge.

If these bearish actions continue, the price could drop to the 60645 SAT level mentioned above. The next psychological supports are 50000 SAT and 40000 SAT if the drops continue. On the other hand, if the descending channel provides support, the 80000 SAT resistance might be revisited. Further resistance lies at 100000 SAT.