Bitcoin’s price saw a sharp decline earlier today that came about close on the heels of news regarding a wallet from 2009 moving 50 BTC for the first time in a decade.

Despite there being some initial speculation that the wallet may belong to the mysterious Bitcoin founder – Satoshi Nakamoto – data now reveals that this is not the case, and the wallet could simply belong to an early miner.

This has led one analytics platform to note that investor sentiment data seems to indicate that the $400 decline that came about as a result of this news was a severe overreaction.

If this proves to be true, Bitcoin could be in for a swift recovery.

Earlier today transactions confirmed that a wallet from 2009 moved 50 BTC. It was a split transaction, with 40 BTC initially being transferred followed by another 10 BTC.

News of this spread across social media platforms like wildfire, and quickly catalyzed a sharp selloff that led Bitcoin to decline from highs of $9,800 to lows of $9,400. 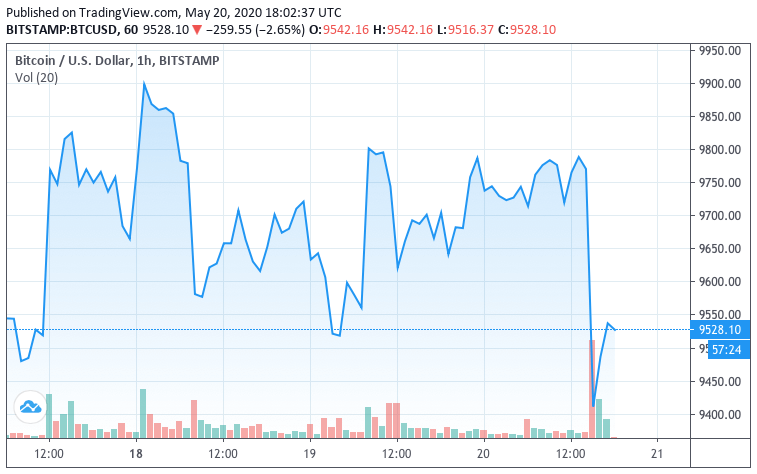 Shortly following this dip, BTC was able to garner some buying pressure that subsequently allowed it to climb back up into the $9,500 region.

The rebound comes as many investors begin to realize that this was not, in fact, Satoshi Nakamoto who moved this BTC.

As reported by CryptoSlate earlier today, the “Patoshi pattern” that is unique to the BTC held by the crypto’s founder is not seen on these tokens.

There were also several miners during that time period that likely still hold Bitcoin dating back to 2009. Because it does not appear that these are Satoshi’s coins, it is likely that they are that of an early miner.

Sentiment data points to an overreaction from investors

If Satoshi were to begin moving or selling his dormant tokens, there would be a legitimate cause for concern.

It does not appear that this is the case, however, making the news-induced selloff an overreaction.

Analytics platform Santiment shared data regarding investor sentiment during the time in which this news began circulating, explaining that the subsequent selloff indicates that there was a “pretty large overreaction” to the news this morning.

“BTC took a slight dip over the past hour of about -4%. Social volume is indicating that there was a pretty large overreaction to this, and it settled down quickly as prices began to bounce.”

If there are no further developments regarding this situation, it is possible that Bitcoin will see a swift recovery.

The digital market as a whole especially Bitcoin has enjoyed a stellar start to 2020 after recording amazing price surges at the beginning...

On the 29th of May, the Bitcoin price could be observed retracing towards the $9350 level on the charts. The cryptocurrency drew a...

Bitcoin (BTC) Price Prediction – May 29 The Bitcoin bears stepped in after two huge bullish days as the technical indicator shows...