Ripple XRP price may be ready to bounce back

The latest development in the cryptocurrency sphere has the greens holding and Ripple XRP price is no exception. Most of the top coins are back on their path towards growth following the crypto market rebound. The top ten coins are now in the green zone.

In the meantime, the kind of cryptocurrency Bitcoin is maintaining its dominance on the index with the comeback of 6 percent. This tends to indicate that the altcoins are weak as compared to Bitcoin against the current correction of the latest sharp dump.

As the trend shows that when top coins drop, XRP tends to drop more gradually and the same goes for its pattern of growth. XRP’s upward movement has been up to 8.53 percent in the last 24 hours while Bitcoin and Ethereum rose up to 10 percent. 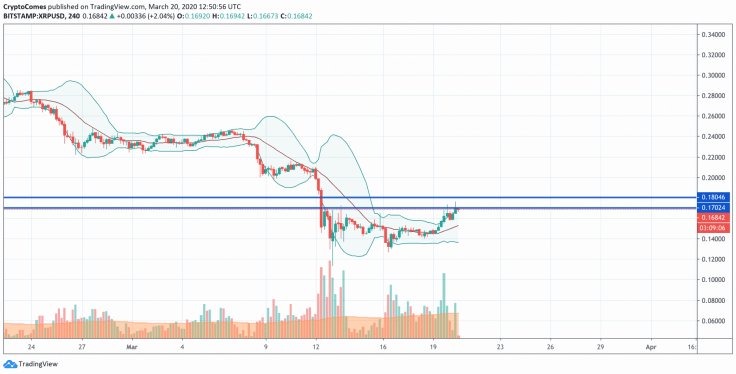 XRP’s rise for the last five days has been up to 30 percent. According to the short-term forecast, the trend seems bullish. Moreover, there has been an increasing demand for XRP, as according to the volume analysis.

However, it seems that XRP is going to settle in a sideways trend for the upcoming days, in order to consolidate the efforts for a bullish trend that has been indicated by the support line of Bollinger Band Indicator. In that event, traders could expect the XRP to trade between the range of $0.17-$0.18.

Bitcoin bulls pursue a trend change by pressing the price to $6,744 but $6,600 needs to hold as support in order to avoid a retest of the...